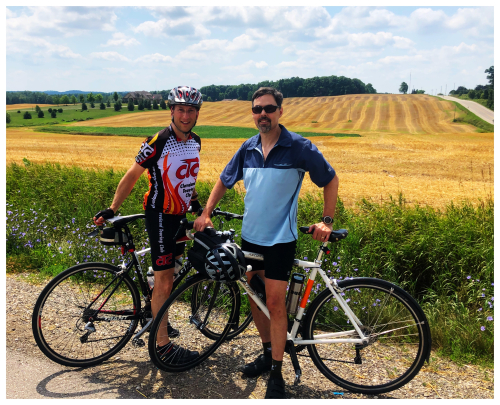 The Toronto Bike Network (TBN) runs a series of rides outside of Toronto each year called Cyclon. I had the good fortune of taking part in their long weekend rides in Waterloo, Ontario this year with my brother Mike and my longtime buddy Bruce. We rode Friday evening, Saturday and Sunday. I skipped out of the Monday morning ride to drive back home to Michigan. We stayed at the Wilfred Laurier College dorms, just down the street from University of Waterloo where I attended graduate school, way back when. The rides ranged in distance from 30k to 100k, with many different distances and speeds on offer. All rides had leaders, though you were free to go at any pace and there was no attempt to keep people in formation. Groups ranged from a dozen to three dozen and after a while people spread out according accordingly.

The Waterloo region is quite rural and we saw plenty of corn fields and working farms in Amish and Mennonite communities. The only downside was that temperatures were quite warm in the afternoon. But by keeping a good pace, we were finished riding before it got too hot. The event was well organized, food was plentiful and everyone was very friendly.

Waterloo and the Universities there have grown tremendously since I was a student. There's no shortage of excellent brewpubs, restaurants and prestigious research and academic buildings donated by Mike Lazaradis and Jim Balsillie, former CEOs of Blackberry (Research in Motion) who built Canada's largest tech company and then watched it drift into oblivion.

Here's a map of one of the rides we did out to Elora. We followed it up with a nice pub lunch at Elora Brewing Company. 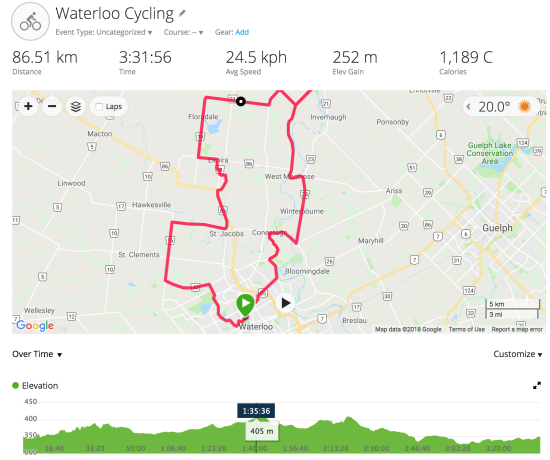