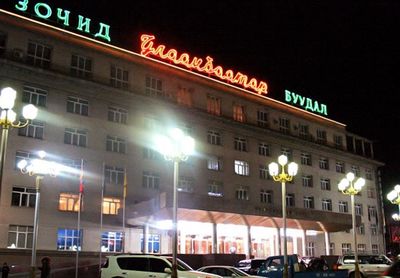 We're now in Ulaan Bataar, a city of more than 1,000,000 people, plus yaks.  Very soviet looking architecture.  Also seems like they have trouble spelling here.

Hoping to find a blues club later on.  That would seem a natural fit.  I don't expect Mongolia gets the top headlining acts, but still, I would expect rock bands like Cheap Trick or Styx probably come through here after the mid-west county fair season ends.  I mean, where else are they gonna play?

But I can't find a bloody thing in the guide books. So typical. About as useful as a Tovarich Samizdat after Glasnost.  So I may have to settle for an iced cold Starbucks decaf Yak-uccino mocha frappé.

The whole thing reminds me of the epic poem "Greetings from Ulan Bator" by Sweden's most famous modern poet, Tomas Transförmer.

Which roughly translates to:

There are in fact 817 different verses, but that's pretty much the highlight.  You know, I could see Styx incorporating that into a revised version of "Kilroy Was Here."